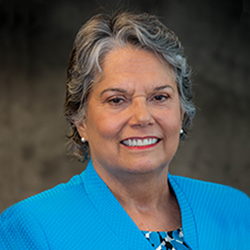 Julie Williamson is a skilled, logical and compassionate mediator and arbitrator who helps resolve business, employment, and probate disputes. She recognizes that all cases contain legal, financial and emotional components that must be respected. She is committed to resolving disputes outside of the courtroom to minimize litigation and allow parties to return to pursuing productive lives and profitable businesses.

Ms. Williamson has focused her practice entirely on mediation and litigation since 2013. Previously, as a litigator for over 32 years, Ms. Williamson handled a wide variety of complex commercial cases, including:

•Defending an NFL franchise in a class action brought by season ticket holders claiming breach of contract in the setting of ticket prices.

•Representing managers in a federal court class action against a publicly held chemical company to recover severance benefits under ERISA.

•Representing investors in actions against national brokerage company in state and federal courts in five states.

•Taking a leading role in federal court case against one hundred defendants, including appearing before the Judicial Panel on Multidistrict Litigation.

WORK HISTORY AND RECOGNITION
Ms. Williamson practiced law in Denver from 1982 to 2013. She was a partner at the law firms of Sherman & Howard, McKenna & Cuneo, L.L.P. and Bieging Shapiro & Barber LLP, and was a founding partner of Hoffman Reilly Pozner & Williamson LLP.Ms. Williamson has been elected to The Best Lawyers in America® for all years since 2006. She was named a Colorado Super Lawyer in Business Litigation from 2009 to 2013 and in Alternative Dispute Resolution in 2014 through 2020. She holds Martindale Hubbell’s highest rating of AV preeminent.

She also takes a limited number of sliding scale and pro-bono cases each year. Please contact AB-CRS to determine if you are eligible.

No charge for travel within the Denver Metro and Front Range areas.